Specific to women’s mental health, oestrogen has the capacity to increase serotonin and the number of serotonin receptors in the brain. It can also modify the production and effects of endorphins – the brain’s “feel good chemicals’, so fluctuations in oestrogen may cause fluctuations in serotonin. These brain chemicals, called neurotransmitters, are largely produced in the gut. In fact approximately 90% of serotonin is produced in the gut. If there are issues around gut health it will direct brain health too. More on this to follow during the programme.

Perimenopause, with its fluctuating oestrogen, is like a perfect storm: low oestrogen levels, directly tinker with the functioning of brain serotonin as well as cognitive function and other systems including insulin metabolism and cholesterol levels, sleep, hot flashes, night sweats, and vaginal dryness, all of which make it generally tough to cope. Because of this perfect storm, many women experience irritability often described as overreacting, being intolerant of even small mistakes by others, overstressing about job performance, worrying about things they never used to worry about, and being easily overwhelmed by social situations with many people.
Menopause is known to trigger mood swings, anxiety, depression, mood changes and cognitive changes. An estimated 20% plus have depression at some point during the menopausal years.

Some women say they feel like they’re going crazy – many women don’t feel like themselves. In fact of the top symptoms usually recorded, many can be attributed as neurological in nature.

Think that you´ve been used to driving a car on petrol (glucose) all your life and then suddenly you switch to a hybrid car in your 40´s and have to get used to a different fuel (ketones and fatty acids). This process takes a little while and the body has the same changes to accommodate.

This means we need to put effort into preserving brain health and function during the perimenopausal and menopausal window.

SAGE may increase alertness, calmness and feeling of contentment. Lemon Balm is also useful for anxiety and support cognition and memory.

Oestrogen is involved in the production of choline which is important for memory. Choline is mainly found in eggs (fish, liver, red meat in lesser amounts) and important for cell integrity.

SLEEP and avoiding negative STRESSORS are also going to be supportive in this stage of life. 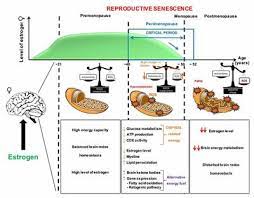